Grupo Cooperativo Cajamar – the leading cooperative bank in the country – has continued to grow its share of the market for lending to the agri-food sector and enterprises. It has also attracted a greater amount of retail customers’ savings, while furthering its investments to support the development of its local community and contribute to creating value for the business community, the self-employed and families. It has simultaneously bolstered its solvency and improved the quality of its balance sheet, giving its business model a boost and building a springboard for future organic growth.

Performing loans to customers are up 4.1% to €28.818 billion, 87% of which has been lent to the agri-food sector and businesses in 2018. The Group now boasts a share of the Spanish market of 14.05%, supported by its large range of specialised products and services and the experience of its advisors and Agri-food Innovation team.

Retail funds under management have grown by 9.1% to €32.792 billion, driven by increases in demand deposits of 15.7% and in off-balance sheet funds of 4%, the latter including mutual funds, savings insurance, pension plans and fixed-income and equity products.

The agreement with Generali to drive growth of the insurance and pension plan business has led to premium increases of 18.9% for life risk insurance, 17.6% for property & casualty insurance, and 3.1% for pension plans contracts. Assets under management in mutual funds are also up 8.9%, despite instability in the markets at the back end of the year. The number of new consumer loans granted through Cajamar Consumo (a joint venture with Cetelem) is also 26.7% higher. 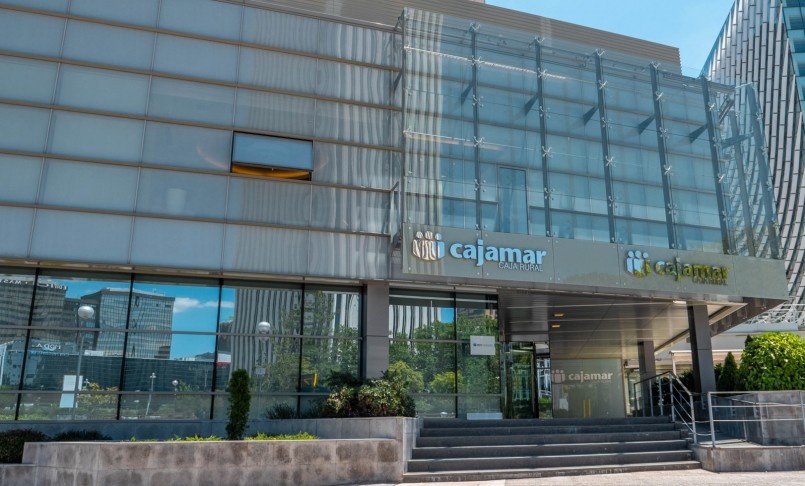 In 2018, Grupo Cooperativo Cajamar posted a consolidated net profit of €82.25 million, 2.7 % higher year-on-year, fuelled by a 3.8% increase in recurring gross income and a reduction in personnel expenses and other general administrative expenses of 6.1% and 3.3%, respectively. This led to recurring net income before provisions shooting up by 32.9%.

The increase in net interest income to €568 million (+6.9%) derives from 5.6% higher finance income and an 11.2% decrease in the cost of off-balance sheet funds.

Further, the cost-income ratio has improved 2.2 pp to 60.63%, assisted by the 7.83% reduction in operating expenses as a result of optimising the commercial network, the digital transformation, the write-down of intangible assets, and the 3.8% increase in recurring gross income to €892 million.

The quality of the balance sheet has improved further as the volume of problem assets has shrank, especially of non-performing loans, which are down 26.8% or €902 million. This has resulted in a 2.9 pp reduction in the NPL ratio to 7.63%. Moreover, factoring in debt forgiveness in the foreclosure procedure and the impact of IFRS 9, the NPA coverage ratio is up 1.9 pp at 48.31%.

The major drive to sell off non-performing assets has cut the volume of gross foreclosed assets by 10% off the back of 19.3% more sales, most notably thanks to the efforts of the branch network and the sale of the Galeón portfolio in June, comprising almost €300 million of NPAs, foreclosed assets and write-offs.

Grupo Cajamar has made further progress in shoring up its solvency and liquidity, particularly the total capital ratio (phase-in), which is up 1.52 pp at 14.25%, after applying IFRS 9 on 1 January 2018. The 7.8% increase in eligible capital and reduction in RWAs also contributed to this. The CET1 ratio, which reflects the highest quality capital, was also up at 12.52% (phase-in) and 11.54% (fully loaded), easily fulfilling the SREP requirements imposed by the SSM.

The Group also enjoys a comfortable level of wholesale funding and unfettered access to the wholesale markets, considerable capacity to generate liquid assets and a healthy liquidity position. It complies with the limits imposed by the European Banking Authority, with maturities covered over the coming years.

A major mortgage-covered bonds issue of €500 million was also placed in 2018, along with the IM BCC Capital 1 securitisation of €972 million at the end of the year, both of which have helped improve solvency. The liquidity coverage ratio (LCR) stands at 207.49 % and the net stable funding ratio (NSFR), at 118.51 %, with regulatory limits sitting above 100%.

The loyalty of Grupo Cajamar’s customers continues to grow, with 1.5 million customers considered to be loyal at year-end 2018 – 44% of the total. Of these loyal customers, some 47% (428,000) are digital customers, which is 9% higher year-on-year. Fully digital users – of the Grupo Cajamar app – also total 159,000, with a 57% increase from a year earlier. Another example of the loyalty of the customer base is the success of the 360º bank account, which has been opened by 164,000 customers. There has been a 55% rise in users and 48% growth in turnover year-on-year.

The strategy of putting the experience of its 3.4million customers at the centre of its business and boosting value propositions for them through the 5,506 professionals,1,018 branches and 1,516 ATMs, as well as through the Group’s online banking and mobile banking channels is continuing to be extremely well received. Thanks to all this, Grupo Cajamar ranks sixth for customer satisfaction in the “Stiga Q4 Customer Satisfaction Survey”, achieving a decent score above the sector average. It sits in third place in terms of customers’ satisfaction with their advisors and eighth for satisfaction with telephone banking.

Throughout 2018, Grupo Cajamar opened six new branches: four in Aragón (Barbastro, Calatayud, Ejea de los Caballeros and Fraga), one in Carmona (Andalusia), and another in Mutxamel (Valencia). It also continues to provide a service through mobile branches, avoiding cases of financial exclusion, to thirty small towns and villages in Almería, Alicante, Valencia and Castellón. These branches attended over 21,500 people during the year, covering upwards of 61,200 kilometres.

In accordance with its unique cooperative banking business, Grupo Cooperativo Cajamar maintains its commitment to businesses, especially to growing and developing the agri-food sector, championing and carrying out knowledge transfer and research projects in which it works closely with public bodies and research centres, technology companies and agri-food companies.

Grupo Cajamar’s laboratories also welcomed a total of 3,249 visitors during 2018, and its researchers and technicians organised 103 knowledge transfer events attended by 9,164 people. Five new publications were also published during the year, the most noteworthy being: Volume 31 of Mediterráneo Económico collection focusing on “Bioeconomy and sustainable development”; the monographs entitled “The pig sector: from uncertainty to leadership” and “The governance of Spanish agri-food cooperative societies: benchmark models and business cases”; and the “First-half 2018 ANICE-Cajamar Barometer on the Spanish meat industry”.